In Search of Emily

I don't know why I have never gone looking for Mr Geniaus' Great-Grandmother's grave but I hadn't until yesterday.

Before we motored home from our trip to Wagga Wagga I checked my database to see if there were any country cemeteries I needed to visit but there were none within 50km of the motorway. We were approaching the southern outskirts of Sydney when I thought of Emily Ball (nee Royds), Mr Geniaus' Great-Grandmother, so I suggested we take a detour via Liverpool Cemetery to find Emily's grave.

This smallish cemetery has a rather modern office, lots of new mausoleums, some older graves and a computerised grave locating kiosk. We quickly found that Emily was buried in Anglican Section B, Row 5, Grave 79. Finding the grave was another matter; the cemetery office gave us a paper diagram that gave the location of various sections in the cemetery but no further details; there is no signage to help one decide which section or row is which.

We identified a few possibilities for Row 5, Grave 79 and none of them had a headstone or marker. By a process of elimination (to identify the rows we noted names on adjoining plots, drove back to the office and entered them in the kiosk) we found Emily's unmarked plot. It's such a disappointment when one finds an unmarked grave; one feels sort of cheated.

I had thought that Emily was buried with a male that I couldn't link to the family. When I got home I checked my files for the reference to that information. In


We had better luck finding the grave of Emily's daughter, Emily Deadman (nee Ball) and her husband, Eric Gladstone Deadman. It had a headstone that we were unable to clean as we were not equipped for a cemetery trip. 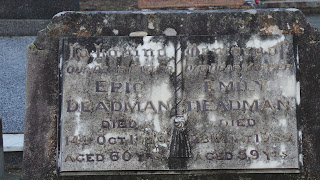 I am also sorry that my devices were running low on power and I was unable to use them to photograph some graves for BillionGraves.