When my Mother passed away a year ago I spent time between her death and funeral reminiscing and preparing her eulogy. As an only child I wanted to give the eulogy as I had for my Dad when he passed away in 2001. As well as having some notes I realised that having images to accompany my talk would make my task easier so I created a Powerpoint presentation for the funeral.

I have decided that I will share the photos and some notes from my eulogy to this blog so that the story of Mum's ordinary life will be preserved on the Pandora Archive. 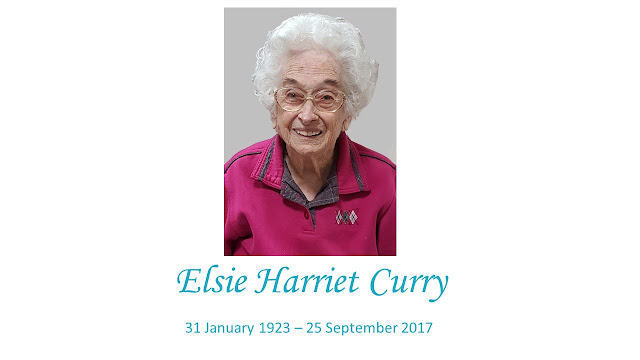 To me Elsie was a mother but she was more than that. In the next few minutes I will examine some of the roles Elsie played in life and share a few vignettes with you. 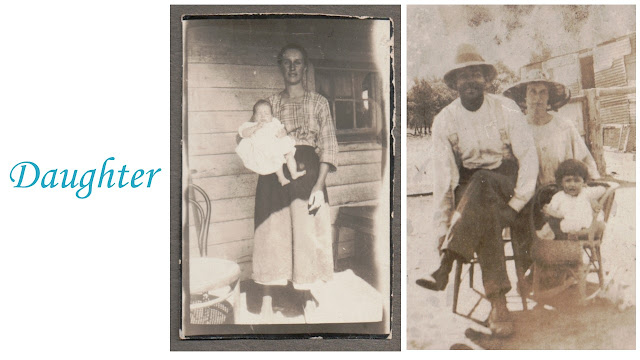 Elsie was born to Frank and Ethel Duncan on a hot summer’s day in 1923 at Cobar. The first of the five Duncan girls she outlived all her siblings and her elder brother Bill Chatfield. For the first few years of her life the family lived out of Cobar on a property named Elsinore. They moved to town when it was time for Elsie to start school. Although there wasn’t a lot of money to go around Mum had a good life in Cobar where she had many pets including Trixie the dog, horses and a pet kangaroo.

Mum loved travelling around the countryside to race meetings, football matches etc with her Dad in his catering van from which he sold home made ginger beer and pies made by Ethel. Elsie enjoyed school and loved needlework but hated her piano lessons at the local convent.

When she left school Elsie’s father took her up to the local post office where she got her first job. I think Elsie inherited her strong work ethic from her mother who ran a café in Cobar and worked in several domestic situations. 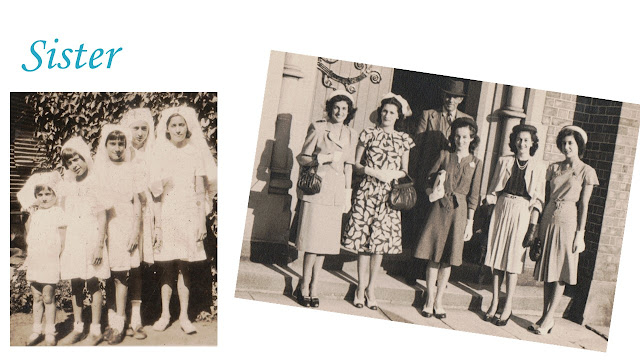 The family moved to Sydney during the second world war as Frank thought there would be more opportunities there for his family. He took Elsie and her sister Eileen to the Sydney GPO where they gained employment, Elsie as a telephoniste.  Elsie was devoted to her brother and sisters. There was no need for a huge circle of friends, her siblings filled this need. She was particularly devoted to her sister Eileen who was sick for many years.


The siblings marked many family celebrations with a group photos. 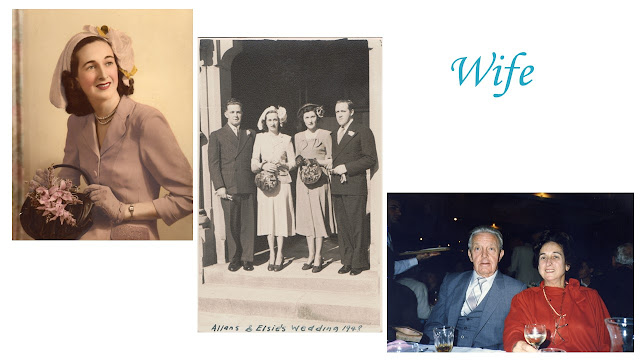 Elsie met Dad, Allan Curry, when he boarded with the Duncan family at Kensington. They were married shortly after the death of her father hence it was a quiet wedding. When Dad was diagnosed with diabetes around 1956 Mum became his carer. That, as an insulin dependent diabetic, he reached his eighties was attributable to the watchful eye of Elsie who monitored his health and diet. 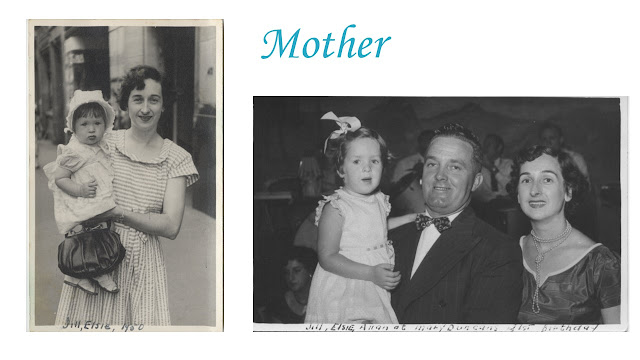 Nine months after my parents marriage I arrived. Since that day until recent times I, and then my family, were the focus of Mum’s life, her raison d’etre. Mum always worked, firstly part-time as a telephoniste, in her friend Roma’s hairdressing salon, with her sister Kath in their delicatessen, then in Farmers Department store and when I was older she took on fulltime clerical work.

Dad believed in saving every penny while Mum believed in spending every dollar that came her way. Working gave her the independence to keep us well dressed and entertained. 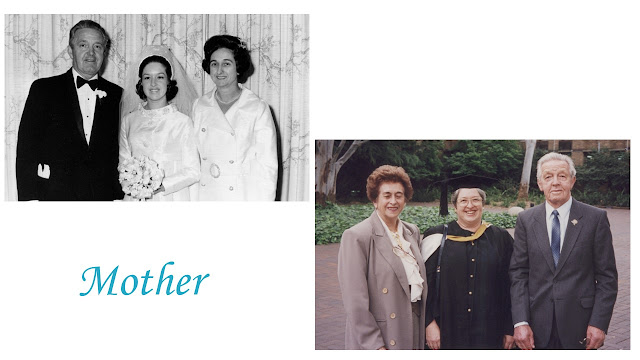 Mum wasn’t educated but she valued education. During the ten years I attended university part-time she and Dad, collected the kids from school and Mum cooked dinner for the family twice a week while she directed Dad in doing the family ironing. Without Mum I wouldn’t have my degrees. In 1972 Elsie became a grandmother. She loved the four grandchildren selflessly. She and Dad took them on many outings and holidays although the holidays stopped when their ranks swelled to four. Dad would come up with the idea for a trip to the zoo or a picnic and Mum would have to organise and cater. Now that I am older and a grandmother I realise how difficult this was for her. No wonder she wore a pained expression in some of Dad’s photos.

When we installed the kids in a home unit next door to Elsie and Allan's home in Dolphin Street I don’t know who was babysitting whom but they all kept an eye on each other. 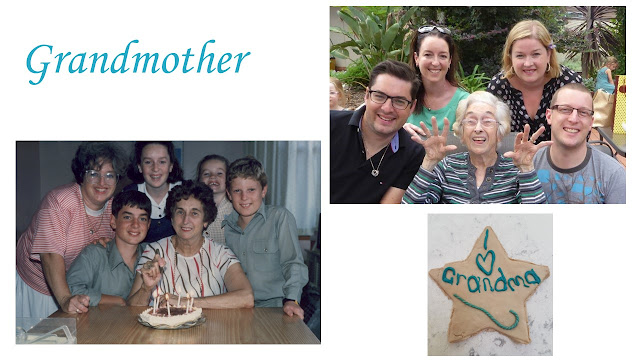 We have so many happy memories of meals shared with or cooked by Elsie. Crumbed cutlets, roast lamb and lasagne were her standards. Cooking wasn’t her strong point but she tried and our stomachs were filled. 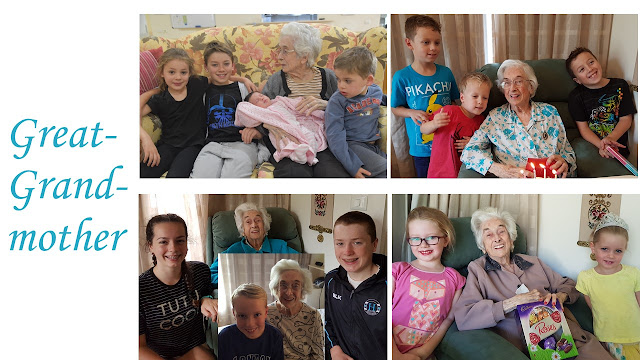 Elsie rejoiced at the births of her great-grandchildren. When recently told that she had 12 Great-Grandchildren Elsie couldn’t believe it. She always was thrilled to see the children but with her failing memory wasn’t able to identify them. Her sharp wit remained with her to the end, the kids enjoyed her humorous quips and comments (and her Favourites chocolates). 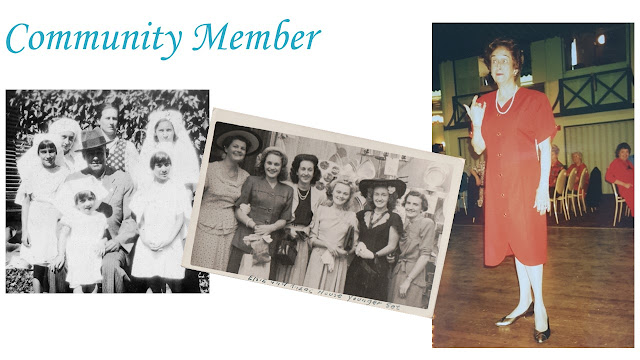 From a young age Elsie was an active member of the broader community. She was a member of the Junior Red Cross in Cobar, ANZAC House younger set as a young woman and in recent years an office bearer with the RSL Ladies Auxiliary, Probus and the War Widows Guild. 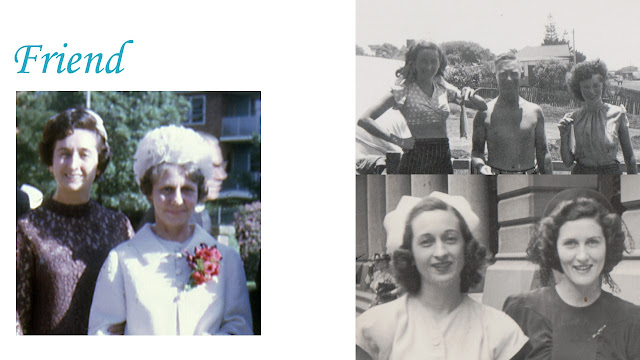 With a gregarious nature Elsie made many friends over the years,Too many for me to list. Three of those friendships that endured over eighty years were with Mavis who went to school with her in Cobar, Roma who lived with the Duncan family in Kensington, and Joan, wife of her brother Bill. 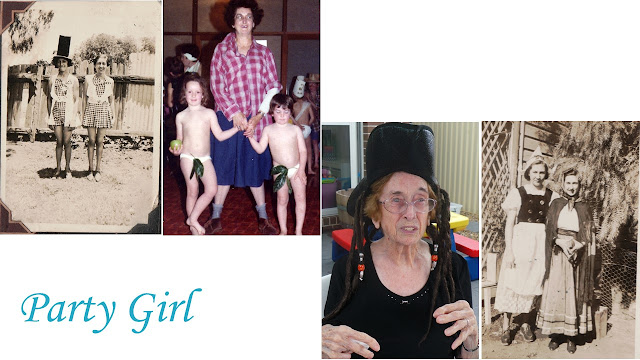 Mum enjoyed a party. She also loved to dress up and play the fool. 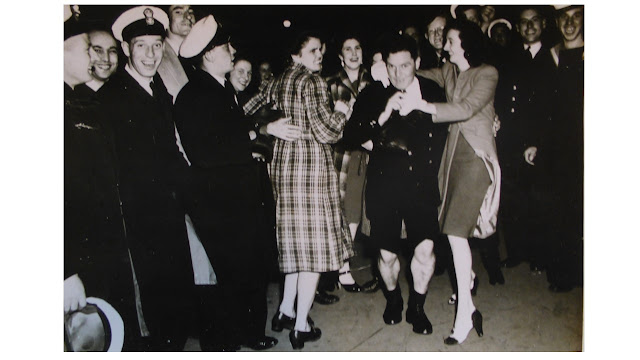 Elsie loved a celebration. On Victory in the Pacific Day, 15th August 1945, Mum went out into Martin Place in Sydney and danced in the crowd. 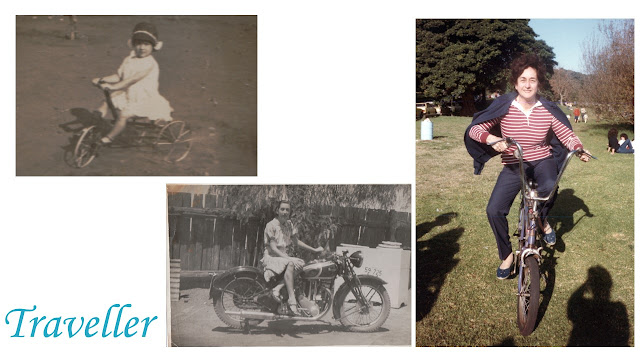 She was always happy to go for a ride, bike, car or bus, Elsie loved an outing. Although she couldn’t drive Elsie was always up to be a passenger. She and her sister Kath went driving and shopping nearly every Saturday until Kath stopped driving. 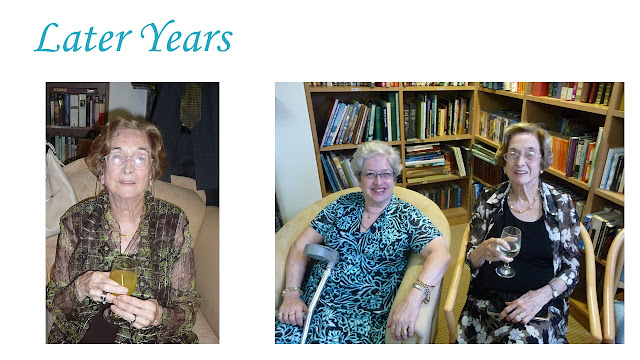 After losing Allan in 2001 Elsie lived on at Randwick for several years. When she decided it was time to move she took up residence at RedleafApartments in Wahroonga. She loved the idea of being a North Shore lady and enjoyed the social outings at Redleaf. She nearly ran me ragged on our shopping trips for appropriate fashions. Wahroonga ladies didn’t shop at Millers!

When she needed more care Elsie moved to the neighbouring hostel at Carise Place where she had a happy and peaceful stay. As Mum’s dementia increased over the past few years our roles reversed. I have watched her fade away but her passing last week was still a shock. I am so grateful to the family for calling us back from overseas so that we could say goodbye. 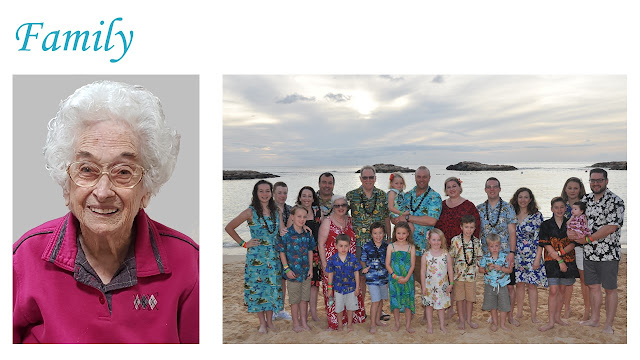 Hers wasn’t a remarkable life but it was a full life, Elsie’s focus was on her family.

Elsie’s spirit lives on through her descendants. We will cherish her memory.
Posted by GeniAus at 7:30 AM

A beautiful tribute to your mother and memories to treasure forever.

What a wonderful tribute to your mum...love the way you’ve shown the stages of her life. Like you I gave my dad’s eulogy and expect that, in due course, I’ll do the same for mum.

Love also that you’ve ensured it will be preserved for posterity.

A beautiful tribute... your mother's life was far from ordinary. She showed her great love for life and made the most of it. Her love for family was overwhelming, something that many don't experience these days.

A wonderful eulogy, Jill. Thank you for sharing.

A wonderful insight into your family and especially your lovely mother and I love how you covered her dash 1923-2017. Thank you for sharing your precious mother with us.

This post is a beautiful tribute to your Mum Jill. You have beautiful memories

This is such a beautiful post and a great idea for a eulogy. I have such a lovely picture of your mother now. What a fun person she would have been to know. My parents forbade/have forbidden eulogies at their funerals. This might be my sneaky beaky way of doing one ;)

So pleased that you shared this, so it will be preserved. Beautifully written xoxo

What a beautiful tribute to your mother and great photos.

Jill, A wonderful idea to share your eulogy to your mother in a post. Clearly she was a wonderful person who lead a full life plus she was full of spunk and vibe. You must miss her so thanks for sharing her life and your thoughts and memories about her. Fran

What a beautiful eulogy and photos to match

I have included your blog in INTERESTING BLOGS in FRIDAY FOSSICKING at
https://thatmomentintime-crissouli.blogspot.com/2018/09/friday-fossicking-sept-28th-2018.html

Thanks all for your comments. I'm pleased I shared Mum's story.

Jill, it was lovely to read the eulogy of your Mum. How very special. Thank you for sharing it. Dot