I cannot imagine how bewildered my grandmother, young Ethel, must have felt when she received news that her huband was Missing in Action and subsequently listed as Killed in the Field.   However, if one searches Australian Military Records one will find no evidence of John Chatfield's existence; he had enlisted under an alias, John Williams.

Bert Chatfield was one of five sons of William Henry Chatfield and Sarah Jane Busby of Northamptonshire in England. Presumably Bert travelled to Australia sometime before 1914 when he married my grandmother in Cobar, NSW. According to his attestation papers Bert, who was a miner in Cobar, had previously been a member of the militia in his home county of Northampton. I have no details of that service but my aunt (his daughter-in-law) says that he was a deserter from the military.

I had written this much of my post by Friday 22 April when I decided that I should try once again to find more info on Bert. I logged onto Ancestry and did a few searches. A search for one of Bert's brothers, George Thurman Chatfield led me to an Ancestry family tree that included Bert. I quickly sent off a message to the tree owner.

Yesterday I heard from the gentleman who owns that tree. This is part of what he said "Thankyou so much for your email,it actually gave me goose bumps as Bert has always been one of the family's mysteries! In relation to me he is my Grandmothers uncle, so in turn my Great Great Uncle. The family tale I was told was that during the First World War he joined the Royal Navy sailing on a Man o War ship, Sailed to Australia, Fell in Love with an Ausralian Girl, deserted the navy and changed his name to marry her,Then Joined the Australian army and was killed at Gallipoli."

I, too, got goosebumps when I read his message. I wonder what my aunt and cousins will say when I tell them that I have located some of their Chatfield family in England. I am still overwhelmed by this find just in time for the Challenge. I replied to that gentleman with a few details and will follow up with more after the Easter break. This man kindly sent a copy of a newspaper clipping from the Wellingborough newspaper showing photo of Bert and his four brothers who were in the service.


I now know that Bert had been in the navy and may have jumped ship in Australia. As Cobar is several hundered miles from the coast I doubt that he fell in love with my grandmother in Cobar before he deserted. On my next trip to the UK following up Bert's naval service record and a dated copy of this clipping will be a research priority.

But back to Bert's story. A digital copy of his service record can be found on The National Archives of Australia website and a summary of his service here.  He enlisted as John Williams in The Australian Army at Dubbo on 20 May, 1916 naming Jane Williams c/o Mrs Pusell as his next of kin. Jane was actually Ethel Jane Chatfield (neePusell), my grandmother. After undertaking some training in Australia Bert's Unit embarked from Australia on board HMAT Ceramic on 7 October 1916. On 4 February 1917 Bert left from Folkestone, England for France. He was reported as missing in action three months later on 3 May 1917. A Court of Enquiry held in the field on 4 December 1917 found that he had been "Killed in the Field".

Bert probably did not know that he had become a father of a daughter, Nellie, who was born on 4 April, 1917 and lived for just two weeks. I wonder if Nellie's birth was premature or if she died of some other cause. Ethel had always told me that she had lost twin girls; although there is no official record of two births I have a copy of a family letter that confirms this.

I do not know when Ethel heard of her husband's fate but on 24 July, 1917 she wrote the following letter to the Army 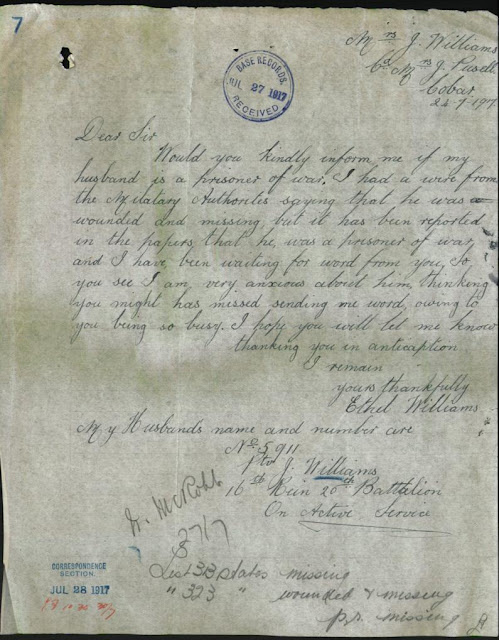 Another woman who was concerned about Bert's fate was his mother who enlisted the help of The Red Cross to find details of Bert's death. The Australian War Memorial has an index to the First World War Wounded and Missing file . Bert's file contains a number of statements from soldiers who were at the front with him. 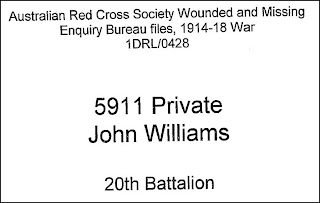 It appears that Bert or Jack as he was known to fellow soldiers sustained a severe injury to his legs and was left in a shell hole by his mates, they retreated and when they returned he was nowhere to be seen. 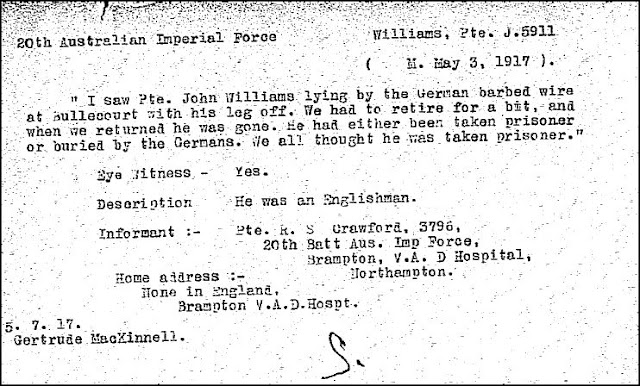 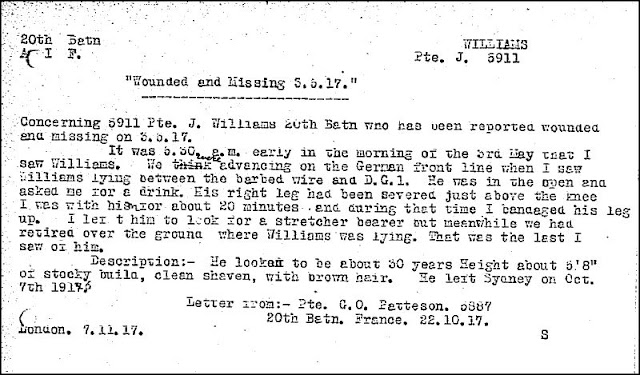 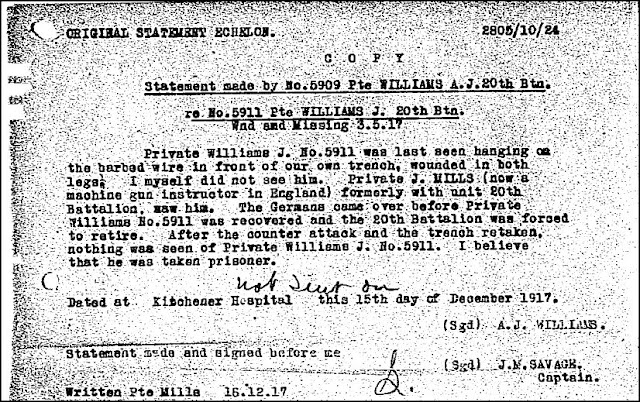 I have travelled to France to visit the Australian Military Cemetery at Villers-Bretonneux to see the panel on which John Williams name is inscribed. Standing there on a winter's day when the biting wind was howling across the plains I shed a tear for Bert and Ethel and the thousands of other young men who made the ultimate sacrifice for their countries.

Ethel was married at 15 and had lost two children and a husband by the time she was 18.  The effect of these events on her must have been enormous.  After the war The Chatfields asked Ethel and Billy to come and live with them in England but she declined.  She was blessed to have supportive parents and a strong family network to help her through these tough times and my Nana was resilient.

When young Bill was seven Ethel married Frank Duncan and went on to produce five daughters, one of whom is my mother. Billy was a loved older brother of his five young sisters. Ethel had a tough but happy life raising Bill and the Duncan girls.

Since writing this post I have visited The National Archives at Kew and have procured a copy of John Bertram  "Bert" Chatfield's Naval Record.

John Bertram  "Bert" Chatfield joined the Royal Navy on 14 May 1907 and signed up for twelve years.  During his time in the navy he worked as a stoker on nine vessels and his conduct was described as Very Good to Fair.

Bert's record confirms that he deserted twice in Australia. On the first occasion in 1910 he was on the loose for six months. He was more successful when he ran in  Sydney on 11 September 2012.


His service record  gives a clue as to why he chose Cobar. Prior to enlistment Bert had worked as a banksman in a colliery; as Cobar was a mining town he would have been able to find work there.

Having now read about Bullecourt in Les Carlyon's The Great War I have an understanding of the events at Bullecourt on May 3rd and realise why Bert's remains have not been found.

It is frustrating to find that some of the links in my original post are now dead. I have amended these and they are live at this date.
Posted by GeniAus at 9:58 PM

I shed a tear too reading this. Great post.

Great research. Such a tragic story

Oh my, how tragic.

Don't know where to start, thank you so much for this post.

I vacilate between being excited by your finding living relatives, solving years of mystery for them and sad for the tragedy and sacrifice of your Nana, her first husband and all those affected.

Congratulations on your success. It is a bitter-sweet success as the details are so tragic. It is a good time (ANZAC Day) to stop and think that there are many thousands of similarly tragic stories amongst the families of all those involved in World War One - on all sides and of all nationalities.
Lest We Forget

Gosh Jill it gave me goosebumps as well !

Thanks, All for your comments, I am pleased that you enjoyed my post. Thanks, especially to Deb who has sent me a photo of Bert or Jack as he was known in Australia.

I will add this photo to a new blog post.

How fantastic. What a truly amazing story. I have tears running down my cheeks.

Thanks so much for sharing it for our blog challenge.

It seems somehow fated that you find the missing pieces of the puzzle when researching for the challenge - maybe you were only meant to find it now?

I love the details of your research, and the documents being posted makes it seem so much more real.

That was a wonderful piece of sleuthing to be able to put together that story. And it doesn't hurt to have generous relatives who can add some special details - and in this case photos as well.

Really interesting enlightening story. You don't want to believe it but seeing the original records and documents is confronting.

I am sure that I have read this previously (but I can't see that I commented).

A tragic but wonderful story. I can see why you are proud of it. 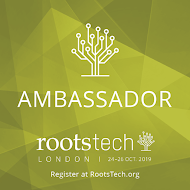 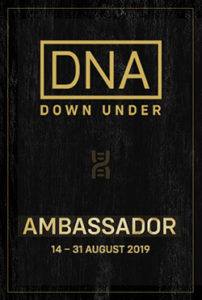