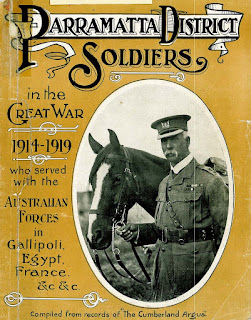 I have been preparing my slides for the webinar on Online Books that I am presenting next week for The Society of Australian Genealogists.

I was browsing through an online .pdf copy of  Parramatta and District Soldiers in the Great War, 1914-1919. Mr GeniAus on seeing the image on my desktop asked whether there were pictures of his Ball Ancestors in the publication.

I had used the publication several years ago for another purpose but didn't think to check for photos of  Grandfather James Ball or Great-Grandfather, John James Ball. Mr GeniAus immediately fired up his laptop and entered the term "Ball" into the publication's search box. He was rewarded with three Ball images. The first was for Fred Ball, brother of James and the second was of James. We had previously seen copies of these images in local newspapers via Trove. 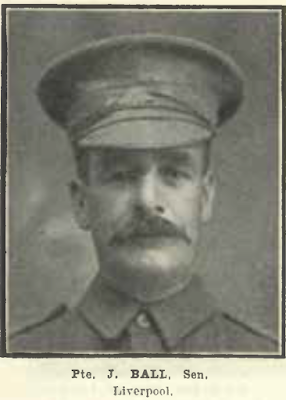 The third image was of "Pte. J. Ball Sen of Liverpool", John James Ball. We have been researching the Ball family for thirty years and this is the first photo we have found of John James. We were both gobsmacked and annoyed with ourselves because we had first looked at this publication several years ago but had blinkers on as we were consulting it for a different purpose.

Needless to say we are both excited that John James in no longer  a Faceless Ancestor. Now we can look again at the few unlabelled Ball images we have to see if we can identify more for John James' gallery.
Posted by GeniAus at 1:40 PM

What a great find and an example of why we should revisit our research. Thanks Jill for the reminder.