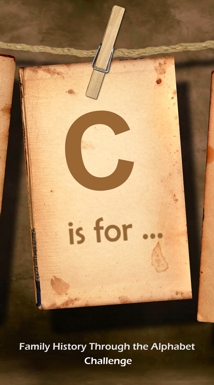 C has to be for Computer

Where would I be without a computer to support my genealogy habit?

I think that I started researching my ancestry in 1988. Although I was the proud owner of a 286 model computer (with the Intel to 20986 chip) at that time I did not use it for my research rather I kept my data on index cards, my notes in a spiral-bound notebook and, as I do today, my certificates and documents in three-ring binders.

After I took delivery of  of my Osborn 486-25 120mb HDD computer @ $AU3395 with 5 year warranty on April 6, 1992 I gave serious thought to using it for genealogy. Initially I developed a home-grown spreadsheet to record my data and then moved on to using database software. I realised that there must be more people in the world who were trying to do the same thing so I investigated commercially developed genealogy software packages.

I cannot remember the names the first two genealogy the andpackages I purchased and tried. I puddled along with their use for a few years before finding and purchasing The Master Genealogist for $185 from Gould Genealogy in 1997. I have been using that program now for 15 years. Recently I decided to investigate other software packages and have purchased The Family Historian (for significantly less dollars) which I think I will use as my main application.

It was in the mid nineties that I started working in a school that had a laptop program. This gave me access to a laptop for home use and, as a volunteer for any educational initiative, I was given unlimited free dial-up Internet access.  Once I had that laptop I was became aware of its possibilities; it was not long before I had purchased my own laptop and started using that for genealogy. Since then I have owned a host of laptops including heavy ones, light ones, touchscreen ones, Macs and PCs. Presently I have a laptop, netbook and tablet.

Undertaking an internet training course in 1995 got me completely hooked. I organised access for home and email addresses for the family and we joined the information superhighway. Some time before the turn of the century I started using Rootsweb mailing lists to communicate with other genealogists. Somehow I managed to connect via email and Rootsweb with new found cousins who generously shared their data with me but, in the the early days, by snail mail.

Fast forward to today. I use my computers on a daily basis for genealogical pursuits. Social media allows me to communicate and collaborate with cousins and genealogy contacts all around the globe in both synchronous and asynchronous modes. I am able to share ancestor anecdotes and genealogy news via my blogs. The family history that I have chosen to publish on the Internet is not static like a printed family history, it is a dynamic, living family history that I am able to update on a regular basis as new information comes to hand. Although I still make many visits to libraries and archives to look at original documents computers make it possible for me to prepare for these visits by using the online catalogues from these repositories. Similarly digitisation projects have enabled me to carry out research and access copies of original documents from the comfort of my kitchen.

A computer is an essential tool for the 21st century genealogist.

C is for computer! Wonderful! It changed my genealogical research and connections too.

1980s onwards, I've used a computer... tiny memory, floppy drives, very very very slow connections, but wow! Was I happy with my computer, even when I had to make a pot of tea and twiddle my thumbs while the computer made a connection! Love researching online, and finding new clues to follow!

I arrived in the computer world in the late 1990s and boy was I hooked. Without it I would never have solved my family history mystery. Great post Jill.

It's hard to imagine that those early PCs had much smaller operating system/memories than a thumb drive/memory stick does these days. I love my computer (most days!)

I started out with a 286 also but not until 1992 and it was love at first byte. (groan) It was 95 or 96 when I did a TAFE course which included using the world wide web. This was the start of my 'internet addiction' LOL. I still use my first ever email address too. It was because I was teaching computing that I got into genealogy.

Great post! Without computers, I wouldn't be able to play in the world of genealogy, due to anti-social researching hours and distance.

I'm sure 99% of us wouldn't have found what we have without them. And it is largely the wide use of computers that have pushed records online, making it easier for research, making genealogy more popular - so we all win with computers.

I started with an Apple 2e in 1986 then when they wanted to charge me more than $1000 for a 1MB hard-drive bought a second hand IBM 286 with a 20MB hard-drive in 1989. It was the first of many computers over the years. Programs was something on the 2e whose name was something like Apple Tree. Then on the IBM Paf then I was dragged kicking and screaming into Windows and Family Tree Maker then to The Master Genealogist v1 which ahs been my primary program since with occaisonal forays into Legacy, Family Historian and Roots Magic, more to see what they were like than anything else.

Great post Jill!!! What a huge difference computers have made to our lives and esp research.First computer I bought was Commodore 64, 1982-83, for the children. Knew it was the way of the future and they needed to grow up with them as just a part of their lives. It worked! :-)
I didn't change from my typewriter until the late 80's and only because I had a need... by that time I'd updated the children to an Amiga and they were patient teachers :-) ... and still are.
Thankyou Jill for all the info & encouragement you provide in this rapidly changing technological world. Much appreciated.

How far computers have advanced in such a short time and how much my research has improved. I often wonder what the future holds and look forward to the advancements.