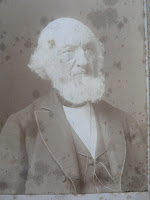 "James the Clock", as we affectionately know him, is James Gowans my husband's 3rd great-grandfather.

Born in 1806 in North Berwick James grew up to be a clockmaker in East Linton (1837-1850) and Galashiels, Scotland. Since we learnt of James' trade we have been anxious to find a clock made by him. Having an object crafted by James or his son James b. 1836 , my husband's 2nd great-grandfather, would add an extra dimension to our family history. James the clock's first son, John Gowans b 1832 who emigrated to the United States was also a watchmaker .


We started searching the internet for a Gowans clock around 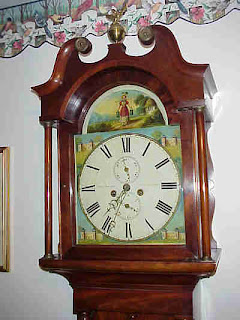 2002 and discovered one on a British clocks website. We willingly paid the 99p

subscription to view the site and download the photos of our first "Gowans" clock find. An email to the site did not elicit an answer so we were unable to find contact details for the owner. The clock's description states " There are four handpainted 'castles' one in each corner of the dial. It has Roman numerals. In the arch it has a picture of a farm-girl carrying two pails on a shoulder yoke with a cottage in the background." The photographs are by Mike Fuss.

We would have loved to see this clock "in the flesh" on a visit to the UK but had to content ourselves with photos. Just today I paid another 99p and went back to this website to check on James' entry that had been updated in 2009, I found an inaccurate and unsourced biographical entry. I was most disappointed and sent an email off to the site.


Not long before setting out on an excursion to the UK in early 2006 a Gowans ancestor contacted us through the Genes Reunited site. After a flurry of emails in which we 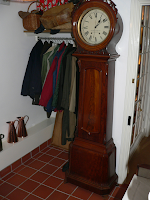 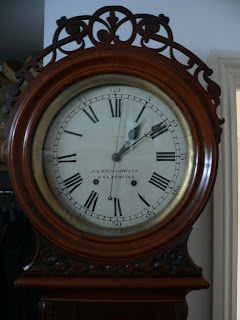 at he had inherited a Gowans clock from an elderly aunt we made arrangements to visit him to share family history and documents and have a viewing of the clock and James the Clock's family bible.

We had a wonderful visit with my husband's 3rd cousin (1 time removed) in his charming cottage in the English countryside. We have established a friendship with him and have subsequently stayed with him on another visit. As well as the clock and bible this cousin had a photo of an elderly James the Clock (above) as well as letters and documents from later generations. Oh, to have spinster aunts who live into their nineties and are bowerbirds to boot.

We have continued to scour the internet and have made contact with clock dealers on three continents in the hope of sourcing a Gowans clock. We regularly scour auction sites in the UK. Our English cousin has been on the lookout for us and helpfully placed an advertisement in an English clock magazine. We have yet to find a clock for sale.

Early this week I did another series of searches for Gowans clocks and got a new hit. This Gowans clock is in Australia at Museum Victoria; it is only 1,000 miles away. We immediately sent off an email to the Museum outlining our relationship to the clock's maker and asking if it would be possible to view it.

I was so excited to get a response from the Museum this morning thanking me for the biographical information supplied and indicating that we may be able to visit the clock at a time to be arranged. When I have photos of this new clock I will post them on my family history website and this blog. This news will make my husband's day.

would be interested in getting in touch with you the searching partie for james gowans clock gwmeens@aapt.net.au

My wife is descended from James Gowan, and the family has a hand-made clock that has been passed down. The story is that this clock was one he had to make for advancement in the guild

Just today I disassembled a James Gowan tall case movement. I bought the clock a month ago from an estate in Richmond,Va. The clock has a mahogany and case and dial very similar to your photos and would be glad to send photos so you can see it. I found your post after deciphering the name on the dial and googling the name. Let me know if you want more information. Art Ritter, Midlothian, Virginia